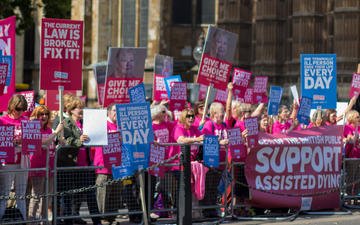 Photo courtesy of Dignity in Dying (CC BY 2.0)

Most people in the UK would like the option of being heavily sedated, having a general anaesthestic or to having euthanasia, if they were dying, according to Oxford research published on 26 March in the medical journal PLOS One.

Professor Dominic Wilkinson, Professor Julian Savulescu and colleagues from the Oxford Uehiro Centre for Practical Ethics, surveyed more than 500 adults in August 2020 on their views about the care of a patient who had one week to live.

The study found a high level of support for access to deep sedation in dying patients.

The report maintains, ‘This study indicates that a substantial proportion of the general community support a range of options at the end of life, including some that are not currently offered in the UK.’

According to Professor Wilkinson, ‘Previous surveys have shown that a large proportion of the UK public wish to have the option of euthanasia. This study shows an even larger number wish to have the choice of being heavily sedated or even receiving a general anaesthetic if they were dying.’

He continues, ‘Currently, in the UK it is legal for doctors to provide pain relief to dying patients, and to use sedatives if that is not enough to keep a patient comfortable. Heavy sedation is used as an option of last resort. General anaesthesia is not currently considered. But members of the general public value the option of deep sleep and complete relief from pain if they were dying. They believe that patients should be given this choice.’

Meanwhile, Professor Savulescu adds, ‘Patients have a right to be unconscious if they are dying. This survey shows that the general public want to have greater choice at the end of life.'

Research cited in Polly Toynbee's piece in The Guardian: Could MPs finally be ready to support the case for assisted dying? (26 March 2021)

1. The survey is based on two anonymous online surveys of members of the UK public, sampled to be representative. They were given a scenario of a hypothetical terminally ill patient with one week to live and asked about the acceptability of providing titrated analgesia, gradual sedation, terminal anaesthesia, and euthanasia.
2. Across both surveys, a majority had undertaken higher education, with seven in 10 having A levels or higher qualifications. Meanwhile, just 2.4% overall had no qualifications.
3. Just over half of all respondents said they were religious with 13.8% describing themselves as very religious.