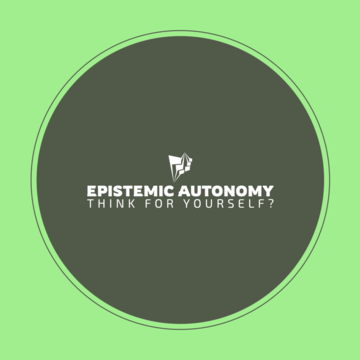 We are grateful to the AHRC for funding this collaborative project with the University of Glasgow.

We value being autonomous: we want to make important decisions for ourselves and being free of coercive influences. Our high valuation of epistemic autonomy is manifested by our rejection of propaganda and our insistence that reporting be free from bias and fair.

But we also rely on others pervasively. When we are ill, we go to a doctor; when our car breaks down, we go to a mechanic. We accept their expert judgment, because they know more than we do. The puzzle of epistemic autonomy consists largely in reconciling our dependence on others with governing ourselves.

The significance of this project is made clear by ongoing debates about expertise in public life. Recall debates about lockdowns during the pandemic. We each needed to decide whether to follow the advice of health authorities, or instead accept competing claims made by protestors and social media posts. But how do we make up our minds in these cases? Health authorities claimed to convey the science, but dissenters argued that the advice focused too narrowly, on the harms caused by Covid and not on the toll on mental health and the economy. The health authorities cited experts, but so could the dissenters. How is the epistemically autonomous agent to decide in such cases? Should she ‘do her own research’? Surely the layperson can’t do better than the experts?

We aim to reconceptualize epistemic autonomy by rethinking it in the light of our pervasive dependence on others. We explore the extent to which autonomy should be thought of as scaffolded: dependent for its development and exercise on environmental supports (ranging from the provision of information through to the provision of cognitive tools and even other people). We will investigate means of better scaffolding autonomy by providing environments and supports that support agency. Using standard philosophical methods, empirical data and feedback from ordinary people, we will explore when such scaffolding ceases to support agency and instead becomes paternalistic.

We will also explore the value of epistemic autonomy. While we value deciding for ourselves, we also value having knowledge (all the more so since knowledge allows us to pursue our goals more effectively). Inevitably, these are values that can conflict: sometimes, thinking for ourselves leads us away from truth. How should we value autonomy relative to knowledge? Are there some spheres in which autonomy is more important than others? Deferring to others about facts seems much less problematic than deferring to others about values. It is one thing to believe that vaccines are safe and effective because an expert told me so. It is quite another to think that individual welfare should take a backseat to the community on the same sort of grounds.

Questions or comments about the project can be directed to the principle investigator, Prof Neil Levy.