We were honoured to welcome Professor Tony Coady to Oxford to deliver the annual Uehiro Lectures in Practical Ethics in 2005.

The lecture series was entitled 'Messy Morality: The Challenge of Politics' and were published as a book by Oxford University Press in 2008.

Tony Coady is one of Australia's best-known philosophers. He has an outstanding international reputation for his writings on epistemology and on political violence and political ethics. His book Testimony: a Philosophical Study (OUP, 1992) has been particularly influential and more recently he published Morality and Political Violence (CUP, 2008) In 1990 he founded and became director of the Centre for Philosophy and Public Issues at the University of Melbourne, the first centre in Australia to be concerned with broad issues of philosophy and public affairs. CPPI later became absorbed into CAPPE where Coady was Deputy-Director for its first four years. In 2005, he gave the Uehiro Lectures on Practical Ethics at the University of Oxford, which were subsequently published in 2008 by Oxford University Press under the title, Messy Morality: the Challenge of Politics.

Messy Morality: The Challenge of Politics 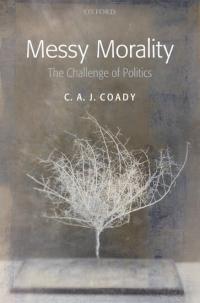 Tony Coady explores the challenges that morality poses to politics. He confronts the complex intellectual tradition known as realism, which seems to deny any relevance of morality to politics, especially international politics. He argues that, although realism has many serious faults, it has lessons to teach us: in particular, it cautions us against the dangers of moralism in thinking about politics and particularly foreign affairs. Morality must not be confused with moralism: Coady characterizes various forms of moralism and sketches their distorting influence on a realistic political morality. He seeks to restore the concept of ideals to an important place in philosophical discussion, and to give it a particular pertinence in the discussion of politics. He deals with the fashionable idea of 'dirty hands', according to which good politics will necessarily involve some degree of moral taint or corruption. Finally, he examines the controversial issue of the role of lying and deception in politics.
Along the way Coady offers illuminating discussion of historical and current political controversies. This lucid book will provoke and stimulate anyone interested in the interface of morality and politics.

"Those who know Tony Coady's writing will find its customary qualities on display pellucid prose, philosophical intelligence, wit, and a fierce and impatient disdain for those who abuse the privileges of power or the requirements of rational argument... this elegant essay is a worthy addition to the literature" - (David Archard, Contemporary Political Theory)

"In this captivating volume, C. A. J. Coady examines some of the challenges that politics poses for morality. For Coady, the challenges include the very nature of political reality, the prevalence of moralism, the role of ideals in politics, and the spectres of deception and dirty hands... Throughout the book, Coady blends well-informed, forthright criticism of recent policies, such as the US led invasion and occupation of Iraq, with cogent philosophical reflection and analysis... The book is a deceptively enjoyable read that, despite its size, makes a valuable contribution to important topics in normative theory and political philosophy." - (Kimberley Brownlee, Notre Dame Philosophical Reviews)